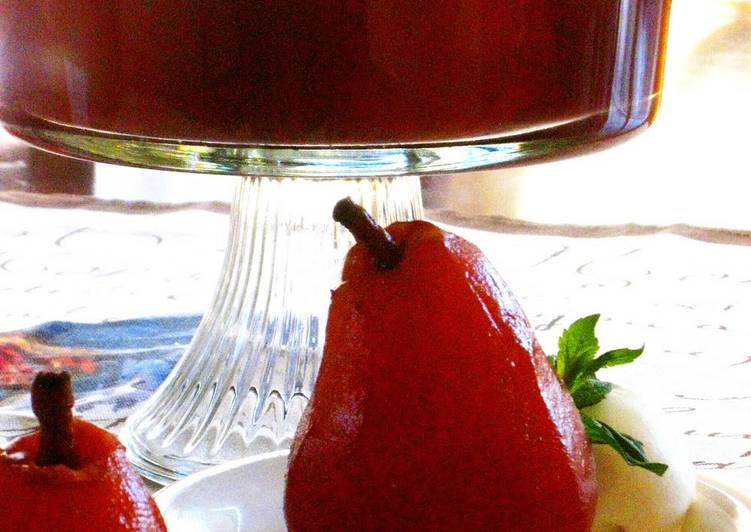 Pear Compote Made with Red Wine. Learn how to poach pears in red wine. This red wine poached pear recipe is a perfect dessert option for cold winter nights or as an elegant, "fancy" brunch. This compote — herbed and sweetened red wine poured over pears and berries — is delicious on its own, but we like to serve it in wine goblets with Almond Tuiles draped over the rims.

By combining peeled pears with red wine and a bouquet of spices, you can create a beautiful dish that highlights the fruit's natural sweetness. A no-fuss, low-fat dessert – no need to peel the pears, just pop them in the oven and wait for the delicious sauce to form, from BBC Good Food. Put the pears into a casserole dish and pour over the wine. You can cook Pear Compote Made with Red Wine using 6 ingredients and 7 steps. Here is how you cook it.

Ingredients of Pear Compote Made with Red Wine

Cut the butter into cubes and push a cube onto the top of each pear. Red wine-poached pears are as beautiful as they are delicious, and with the Anova Sous Vide Precision Cooker, they're now fool-proof. Serve them with ice cream and a decadent sauce topping for a refined, impressive dessert. A fruit compote is a good thing to have on hand, especially if it's as versatile as this one. tree-nut-free. low-sodium. red-meat-free.

Pear Compote Made with Red Wine step by step

Set over a medium flame to bring to a simmer. Meanwhile, peel and core the pears, making sure to also nick out the stem which runs from the core to the top of the pear. Gently remove pears from liquid and allow to come to room temperature. In large saucepan, combine wine, honey, vanilla and spices. Cook over high heat until mixture boils.